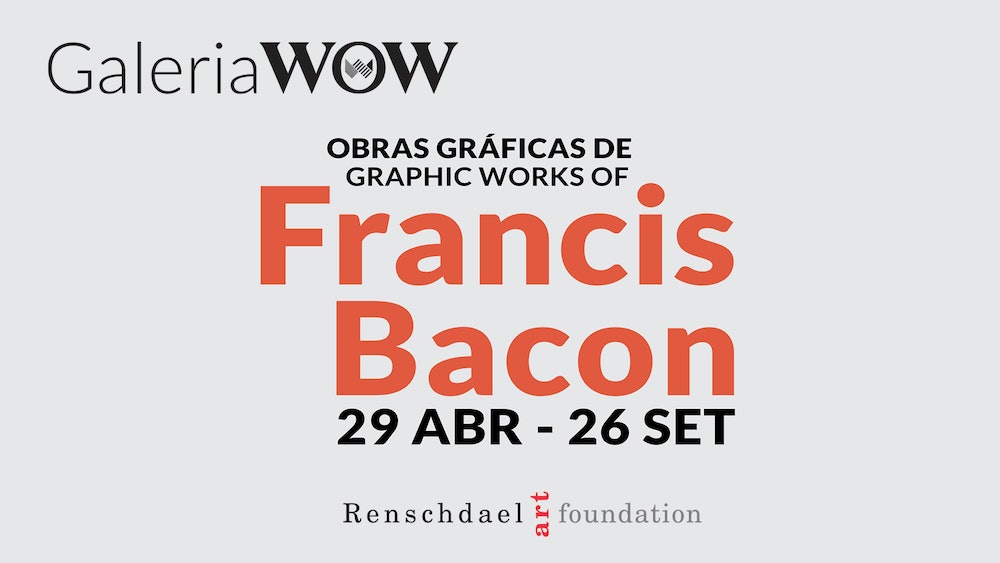 The starting point for this exhibition is the set of graphic works by Francis Bacon on loan from Renschdael Art Foundation, shown together for the first time in Portugal. These works were produced between 1971 and 1991, representing various stages in his career. Namely, from 1955, with Study for Portrait II, situated on the wall facing the entrance, to 1988, with the Second Version of Triptych 1944.

Though initially adamant to produce graphic works, Francis Bacon surrendered to mounting pressure from museums and private collector’s requests and in 1971 finally agreed to the publication of his first prints. In this exhibition we feature twenty-three works from lithographs, etchings and aquatints made by acclaimed grandmaster printers such as Mourlot, Maeght and Georges Visat under Francis Bacon’s close supervision and partnership.

The exhibition aims to introduce the work and life of one of the world’s biggest artists of the twentieth century. Bringing forth some of the artist’s more poignant artworks that demonstrate his imaginary and pictorial ability by tracing Bacon’s personal and professional career in his mid and later periods as well as his relationship with the subjects of religion, literature, rivalry, portraiture and death.

As an atheist, Bacon sought to express what it was to live in a world without God or afterlife. By setting sensual abandon and physical compulsion against hopelessness and irrationality, he showed the human as simply another animal. As a response to the challenge that photography posed for painting, he developed a unique realism which could convey more about the state of existence than photography’s representation of the perceived world. True to its words, Francis Bacon never stopped painting until the day of his death in 1992

This exhibition is also the first show opening up in WOW’s latest space – the GALERIA WOW – celebrating the birth of a new space for cultural and artistic practices..